“En Marge Du Monde,” a television series in Canada came to film Miriam Lancewood during her expedition with Tamar Valkenier. Have a look on social media @enmargedumonde and @tv5.ca on Facebook.
Watch it online on the TV5 website.

EPIC FEMALE EXPEDITION. Miriam Lancewood went with Tamar Valkenier on an Epic Female Expedition in the alpine wilderness of New Zealand.
For more than two months they survived on hunting and gathering with only a rod and rifle. Have a look on youtube for the  little movie.
Expedition made possible by our sponsor KELTY and SIERRA DESIGNS, KEEN sandals – from OUTDOOR TYCOON Nederland.

Listen here to the Not starving Artist Podcast with Angie Nol.
“Her book is one of the most inspirational, funny and honest books I’ve had the pleasure of reading in a long time and it’s definitely a recommended read.”
Angie Nol.

Ben Fogle:
“I found the book ‘Woman in the Wilderness’ intriguing and mesmerising’,
and once you’ve met Miriam….you’ll never forget her” 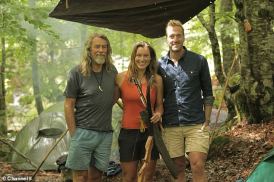 Ben Fogle came to visit Miriam and Peter in Bulgaria
in 2018 for New Lives in the Wild.
Have a look at Ben Fogles tweets.

Have a look on YOUTUBE for more TV fragments.

Mark Crysell: “WOMAN IN THE WILDERNESS is a superbly well written book.
The story is just so unique and fascinating.”

Click on the following link to watch the Dutch episode [Naar het einde van de wereld], “To the end of the world”, watched by 3,5 million people on TV in 2017.